Here are some photos of the pier and slips in Baltimore, Co. Cork. Baltimore has one of the best harbours in Ireland that has ample depth to accommodate large vessels and is sheltered enough for smaller vessels. There are two slips for launching in Baltimore and all the facilities associated with a busy port.

This is the refurbished pier, the end of which is used by the ferrys to Oilean Cléire ( Cape Clear ) and Sherkin Island one of which can be seen at the end of the pier. Smaller craft can moor alongside closer to the shore, where it is quite shallow at low water. 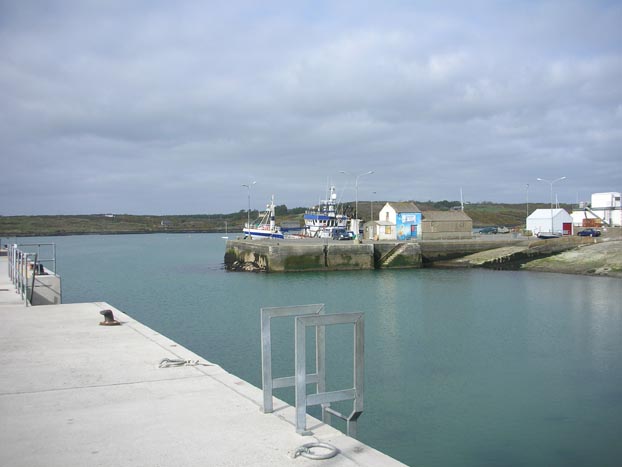 Looking west from the start of the pier you can see the slip in the right hand section of the photo. Actually there are three slips and a boat railway. Starting from the west is a public slip, the boat railway, the RNLI inshore lifeboat slip and the Baltimore Sailing club slip. With so many entities using the shore line you can appreciate that Baltimore can be a bustling place in the summer season. These photos were taken on a beautiful day in April. The pier in the picture is foul on its southern end and the western side is used by commercial boats. Charter and dive boats usually tie up at its eastern side.

This is another slip and can be used for launching and tying up to by small craft for short periods there are rings along its outer edge. The large stone building in the background is Dún na Sead Castle which is open to the public during the summer. (The stairs in the castle were built by my friend and colleague Simon Hassett.) To the right you can see the main square where it all happens during the summer and if the weather is right is more akin to the french riveria than west cork. If you are launching a boat in Baltimore there is parking for trailers on the road side beside the old BIM boatyard and across the road from Glenans who are celebrating 40 years in Baltimore this year.

One thought on “West Cork Launch site No. 2 Baltimore”